Fair is Not Fair

In the late 19th and early 20th century the United States and European powers forced isolationist Asian nations like Japan to open to Western markets. The existing governments of the region reacted in vastly different ways. The land of the rising sun, perhaps more so than any of its neighbors, very quickly repositioned itself in the face of an overwhelming trade deficit by starting made-for-export manufacturing industries. International expositions became showrooms for the crafts and manufactures of Japan, and despite the discriminating sentiments of the time many of the works were often considered fine art worthy of display alongside those produced in the West. Two such Japanese objects, a gilt bronze incense burner and an embroidered textile, have been previously examined in Imposition of Exposition Exhibition Export Ware. This post looks at a collection of Satsuma ware in the Bowers Museum, Japanese stoneware that won similar acclaim at world’s fairs.

Satsuma was once the name of a Japanese province on the island of Kyūshū, today encompassing the western half of Kagoshima Prefecture. Many of the most renowned names in the history of Japanese ceramics hail from this region. Though stoneware was produced in China as early as the Shang dynasty, the transmission to the island nation was long delayed and seems to have come by way of the Korean peninsula around the end of the 16th century when Toyotomi Hideyoshi ordered incursions into the mainland county. Further stylistic influences on Satsuma ware can be traced to Chinese imports. When Japanese potters began to incorporate local motifs and aesthetic sensibilities, the first phase of Satsuma ware was born. 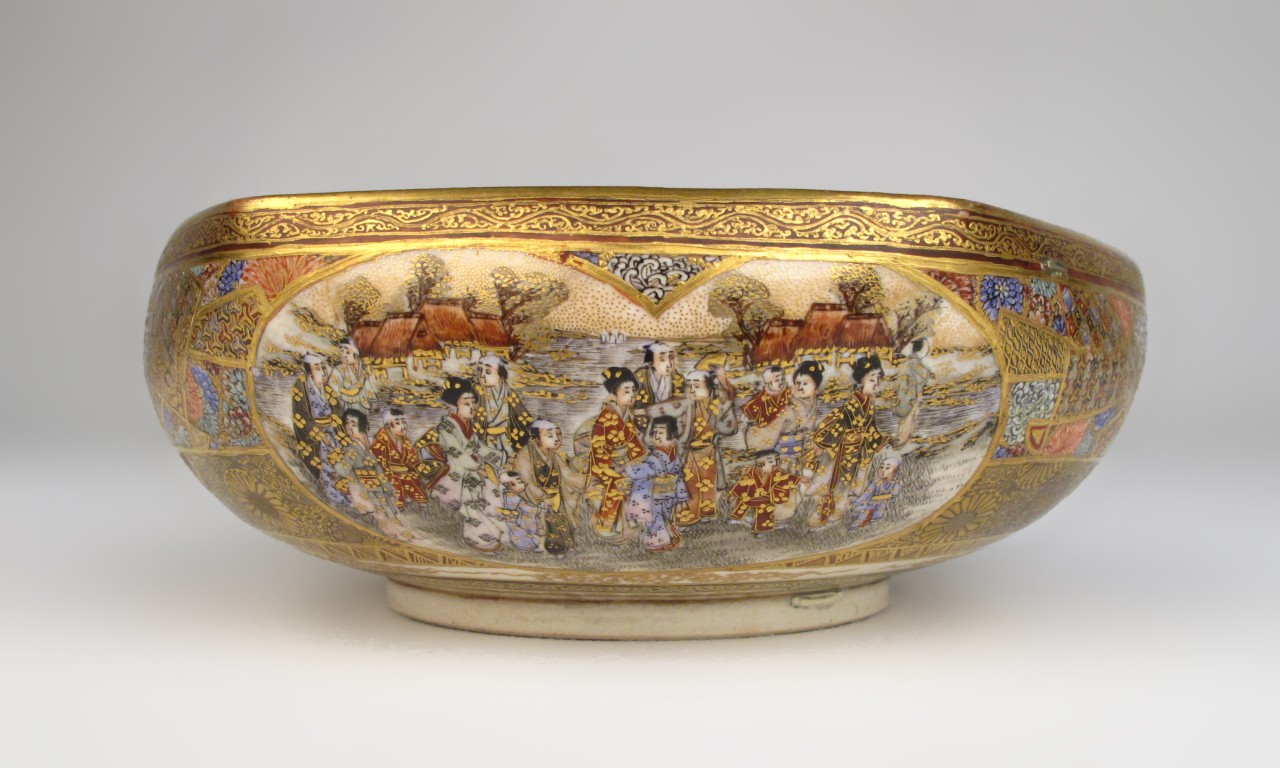 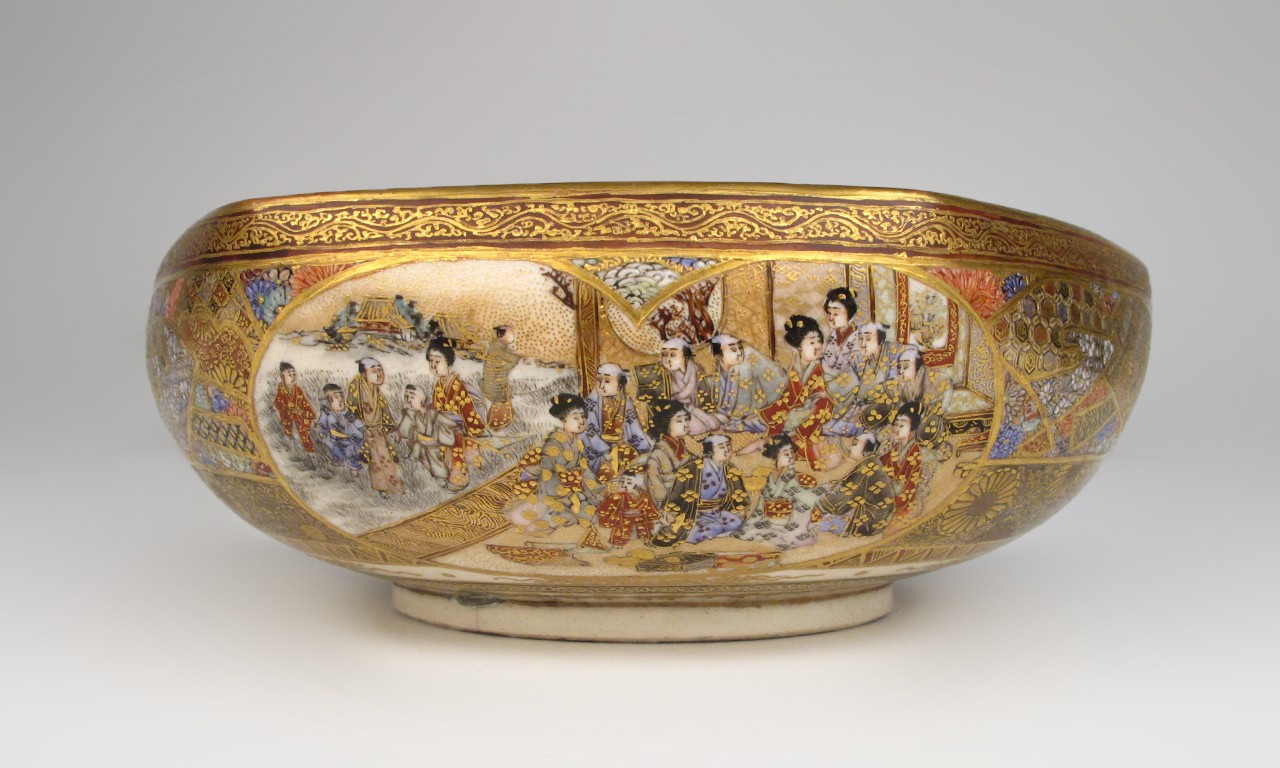 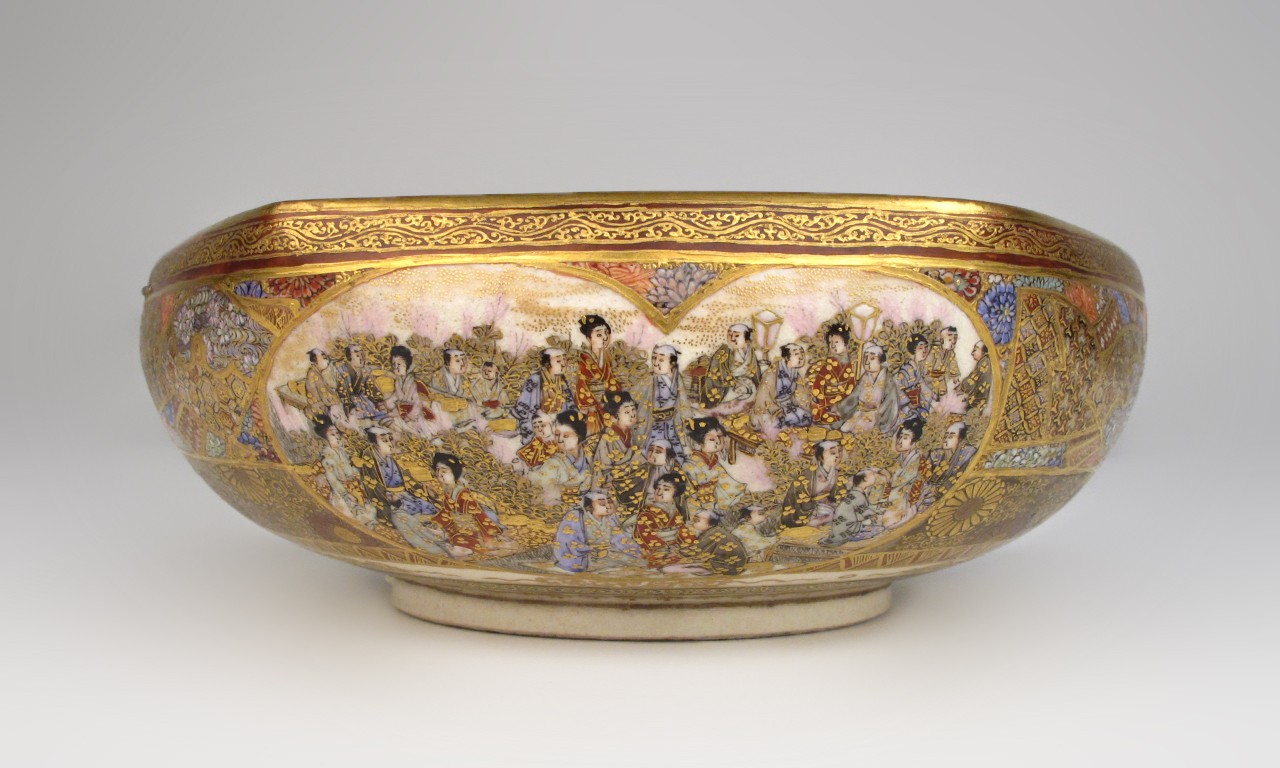 This style of ceramics was first made famous by the patronage and promotion of the Shimazu family who ruled over Satsuma province as the daimyo. During the early 17th and 18th centuries, the production of the ceramics was limited, and most pieces did not trade far. This is in part due to the simple forms and finishings employed by potters. Before the 19th century, most Japanese stoneware pieces were used as household items and thus required little decoration aside from plain slips. Authentic Satsuma ware from this period is quite rare today due to its limited production, a factor which has only increased its demand and value, and which has spurred the production of many forgeries over the years. The early 19th century marked a major turning point for Satsuma ware when regional artists began to employ an overglaze painting technique that had been popularized to the north in the Kyoto region.

The stoneware was first internationally exhibited at the 1867 World’s Fair in Paris and the overwhelmingly positive response created an overnight interest in Japanese ceramic exports. Given that wares from Satsuma had been exhibited, the word Satsuma became a buzzword for Western buyers. Many cities in Japan began to make “Satsuma style” earthenware sold as Satsuma ware to meet the demands of Western consumers. The two most famous Satsuma ware companies outside of Satsuma were Kinkozan of Kyoto and Yabu Meizan of Osaka. Though technically Japanese stoneware is only classified as Satsuma ware if it comes from Satsuma, many experts believe that some of the finest examples of Satsuma style stoneware was produced outside of the province.

An opaque, cream-colored glaze embellished with gold and any other designs define the Satsuma ware of the Meiji and Taisho periods. The ceramics were highly decorative, and their diverse motifs ranged from elaborate depictions of flora and fauna—both real and mythological—to romanticized genre paintings. In the 19th century, as the popularity of the ware continued to increase in the West, Japanese potters began to tailor the design of the wares to what research showed better-appealed to a Western audience. The vases, dishes, cups, bowls, incense burners, teapots, and myriad of other wares became overladen with gold embellishments and distorted tales from Japanese folklore that often fell short of properly reflect Japanese culture. As the industry matured a more controlled and refined aesthetic was developed by companies like Yabu Meizan. In the esteemed history of Japanese global enterprises, Satsuma ware can be considered one of the first Japanese products that were driven by the Western market.

Takes One to Snow One: Evylena Nunn Miller’s Oils of Japan in Winter

A Budai By Any Other Name Would be Just as Compassionate

Five Faces of the Moon

Utagawa Yoshiiku and the Blooming World