The Bowers Museum is proud to generate traveling exhibitions with international appeal and cultural significance of the highest caliber. 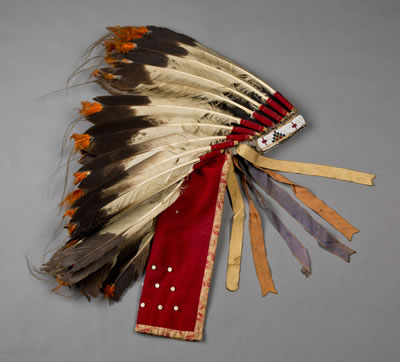 Santa Ana, Calif. — The Bowers Museum is honored to present First Americans: Tribal Art from North America. This exhibition was presented at the Guangdong Museum in Guangzhou, China July 11 - October 19, 2014. A three-venue tour, the exhibition then opened at the Shanxi Museum in December 2014 and at the Hunan Museum in April 2015, before returning to the U.S. The exhibition was previously displayed at the Museo del Oro in Bogotá, Colombia under the title of "Traditions and Transitions: Tribal Art from North America."

This exhibition highlights the various regions of Native North America through the presentation of fine examples of representative artwork from each region. Drawing from the Bowers' collection from the tribes native to the western United States, "First Americans" includes several important pieces including what may be the earliest example of a transitional Navajo First Phase Chief 's blanket, an early Hopi katsina doll, and from Baja, California, a rare Seri feathered kilt. Also included from the American Southwest are fine examples of pottery from notable potters, excellent examples of California basketry, and Plains Indian beadwork. The Northwest Coast is well represented by wood carvings and a fine rattle in the form of a bird, and further north in the Arctic is highlighted with ivory examples of art and objects of daily life.

Artistic traditions are unique and whether practical or symbolic in purpose, they reflect the fundamental sources generally shared by Native North Americans: a profound connection with nature and the environment; and the relationship of humans' role with the spiritual world and universe. Each work of art selected for this exhibition reflects the beauty, diversity, and power achieved by artists of the past and of those that carry on tradition in the present.

This exhibition marks the first time a major exhibition of Native American art traveled in China. The exhibition is organized by the Bowers Museum and made possible with sponsorship from China Southern Airlines. A catalog of the exhibition in Chinese is available from the Guangdong Museum.

The "Traditions and Transitions" catalog is available in a bilingual Spanish/English edition in the Bowers Museum Gallery Store.