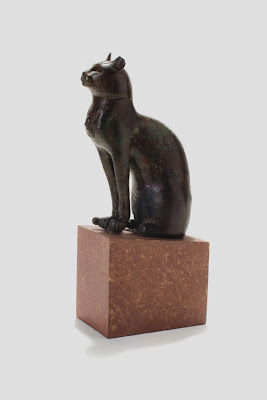 Figure of a Cat, c. 946-342 BC
Egypt
Bronze; 8 1/2 x 3 x 6 in.
80.60.3
Gift of Mr. & Mrs. Richard & Marilyn McCarthy Poised elegantly with a slightly lifted head and a protruding chest this cast bronze statuette of a cat illustrates the admiration ancient Egyptians had for this animal. Domesticated by the Egyptians about 1500 BC, cats proved useful in controlling rodent populations. Soon they became regular household pets and this new found companionship is depicted in artworks from this period onward. This bronze cat dates to the 22nd Dynasty or relatively thereafter when the role of the goddess Bastet, associated with the cat, rose in religious prominence. The cat’s whiskers and inner ears are defined by incised lines and the eyes, nose and mouth are realistically rendered. Both ears are pierced and at one time earrings would have hung there. This type of adornment was not exclusive to depictions of cats but was a practice carried out by doting owners. A necklace rests on the cat’s chest with a reference to the goddess Bastet associated with protection and fertility. Egyptians didn’t worship animals, but equated their qualities with the characteristics of the gods. The cat and the goddess Bastet were associated because of their shared protective and gentle traits especially linked to child birthing and rearing. Statuettes depicting cats, like the one pictured here, and mummified cats were often offered at temples as symbols of devotion to the goddess; in some cases mummified cats were sealed within the bronze statuettes. In addition to temple complexes, cat cemeteries have been found throughout Egypt. Studies of the animals' remains suggest that they may have been bred as offerings since many were found to be young in age.
All images and text under copyright. Please contact Collection Department for permission to use. Information subject to change with further research.
Mantle, Chimu Culture, Peru
Miniature Baskets and Pottery