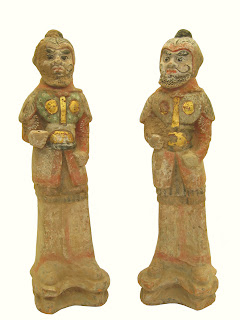 Warrior Figures
China, Tang Dynasty (618-907)
Ceramic, paint
2001.58.4-.1-.2 To be included in the Bowers Museum’s upcoming September exhibition of objects from the permanent collection is this pair of warrior figures serving as guardians. Tomb guardians are commonly found in Chinese tombs, the most notorious being the life size terracotta warriors of China’s First Emperor Qin Shihuangdi. The armor worn by the two warriors pictured here is standard for the Tang dynasty, consisting of breast plates held in place by cords down the center, an armored skirt here parted in the center, and upper arm guards. Originally each warrior would have held a sword in his right hand. The bulging eyes, expanded chests, and beards with curled mustaches are meant to give a ferocious appearance that would dissuade evil demons from entering the tomb. Tang dynasty China (618-907) is generally remembered as an era of progress and stability, artistic achievement (especially in ceramics and poetry), and as vibrantly cosmopolitan. Further, the dynasty is noted for the reign of Empress Wu (China’s first Empress), and the abundance of exotic luxury items brought via the Silk Road. At its zenith the Tang capital (modern day Xi’an) was the largest city in the world.
All images and text under copyright. Please contact Collection Department for permission to use. Information subject to change with further research.
1910 Cash Register
Madame Modjeska in "Cleopatra"