Eureka: Inventions of the Bowers Museum 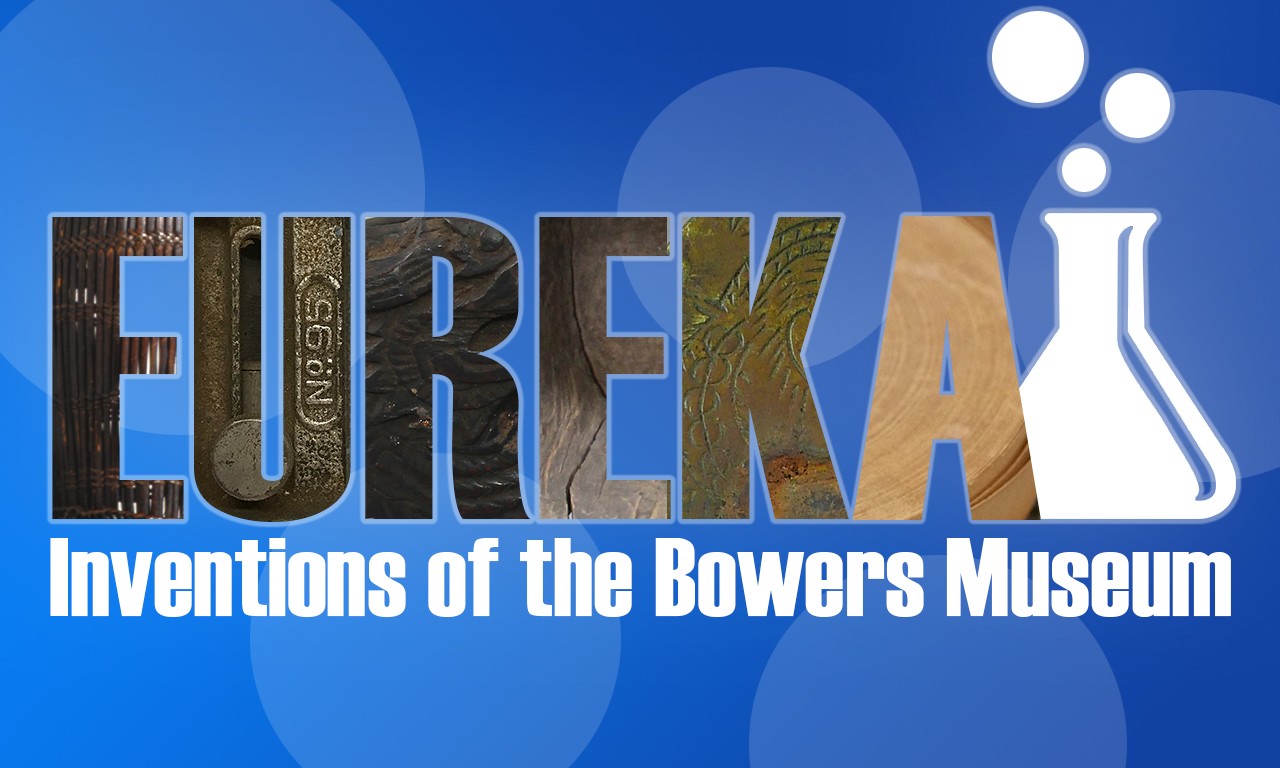 The 7th to 13th of June is Museum Week, an annual global event which celebrates museums. The different days of the week are marked with hashtags or themes through which museums can share their collections. Today’s is #EurekaMW, an opportunity to look at some innovations in our collections which may have prompted the maker to say, “eureka!” Technology comes in many shapes, sizes, and degrees of complexity. Nowadays it is practically taken for granted that inventions must be smarter than their users, but the designs in this post illustrates that simple solutions to issues generated around the world can be just as sensational as supercomputers.

Fishing has been a primary means of sustenance for peoples around the world since ancient times. Though the morphology of traps varies greatly from region to region and even within the Philippines where this example hails from, it is a testament to the effectiveness of this type of trap that it is used around the world. Called a bottle trap because it is shaped like a bottle with an inverted funnel, it is usually baited and weighted, tied to a line and tossed into a spot where fish congregate. The brilliant and simple incorporation of the inverted funnel allows fish easy access to the bait but makes it so that they cannot escape.

The butt gauge solved a major issue that had plagued carpenters since the invention of the butt hinge, that is, the creation of a standard tool which could be used to install butt hinges. If you do not fall into the relatively small group of people that could define a butt hinge offhand, it is not because you have never used one. They remain one of the most popular door hinges in the United States because both the hinge’s plates are mortised, one into the door and the other into the jamb. Tragically, the late 20th century move to sell doors with jambs led to butt gauges becoming irrelevant in all but the most DIY situations. The simple but effective design of the Stanley No. 95 Butt Gauge made it arguably the most popular butt gauge ever made as evidenced by its continued manufacture from 1897 to 1984.

This line marker or mò dǒu was traditionally used by the Miao and other cultures of China in carpentry and construction to create long, straight lines between two points. Line is wrapped around a reel and strung through the small, open receptacle with a weight tied to the other end, in this case a deer horn. The receptacle would be filled with ink-soaked cotton so that when the string was run through the bowl it would itself become covered with ink. When carefully set against a piece of wood the ink-covered string would leave a mark, usually to indicate where wood needed to be cut. Ink lines like this are used throughout East Asia and tend to be highly decorated with motifs like the dragon we see here.

While a quick look at this object might suggest that it was used to serve food, small holes on the inside of each of the four cavities bely this object’s true function, even if it would not be usable in its current state. This style of wooden bellows made by several of Gabon’s cultural groups would have originally had each cavity covered by airtight skin. Long wooden sticks connected to the skins would have allowed a blacksmith or their assistant to quickly push the air in the sealed chambers of the bellows through wooden tubes and into clay pipes to supply a fire with air. This style of bellows might not have fueled the production of iron tools in Africa, but it did fan that flame.

The Yao culture of China traditionally used tools like this to harvest rice. Women would hold the tool just below the bronze piece with the long curved wooden end facing toward their body. By grasping rice plants with their other hand, the tool allowed for more precise control while cutting. It is assumed that the shape of the curved shaft would have played some role in holding back other plants, making it a two in one of sorts. Yao culture thrives on rice production as their primary food source but also as a primary trade commodity. Most Yao groups are settled along hills and mountains with impressive, terraced rice fields.

Stenotypes are nifty inventions which allow trained users to write in concise shorthand at incredible speeds. They were introduced about the same time as the first commercial typewriters, but rather than having a key for every character of the English alphabet, they rely on different combinations of keystrokes to produce characters. This is the second iteration of Miles Bartholomew’s stenograph. It was first patented in 1884 and made mostly aesthetic improvements on the first model. Devices like this greatly expanded the note-taking capacity of reporters. With further eureka moments along the way, modern day devices allow the fastest court stenographers to write at speeds of up to 375 words per minute.

Tags:
African Asian Chinese US History
The Bowers Father-Watchers Handbook
Carvings on a Half Shell: Coconut Artifacts of Oce...

The Thing About Ding: Chinese Ritual Cauldrons Through the Ages