We all know from the age-old adage not to throw away our money, but as this blog has already indicated in the past, currencies around the world come in all shapes and sizes—some are meant to be thrown. Throughout Africa numerous currencies were historically crafted from an incredible array of mediums. Iron bracelets, shell containers, and even weapons could be traded for essential goods or used as bride price. One of these currency forms was the throwing knife. It serves as a particularly interesting example because of its widespread usage throughout Central Africa, and because its many forms indicate exactly how distinct currencies can be. This post examines three throwing knives from three groups in Central Africa, looking at how different stylistic variations of the same item can develop. 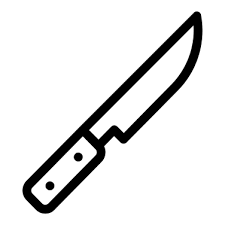 The shape of African throwing knives varies widely from culture to culture. In the broadest terms, there are five different shapes of throwing knife, each roughly resembling letters of the alphabet: F, Z, Y, E and I. Though these shapes have been broadly tied to geographical regions, due to issues with tracking the provenance of blades this classification system has more exceptions than rules. It is believed that the earliest iteration of these throwing knives—shaped like the letter F—arrived in Central Africa from Libya by way of the Sahara, making its first stop among the peoples of Chad. In this post both the throwing knives from Cameroon or Nigeria directly fit this archetype, though neither originates from Chad. The final knife most likely comes from a subset of F-shaped throwing knives with heads in the shapes of birds. Here though we see that the ‘bird head’ has split open and unfolded with one half retaining the beak shape and the other taking on the form of a crescent. As much as anything this change shows how an object type spreading across an area will inevitably lead to its evolution much in the same way the game of telephone is played.

With African iron smelting now estimated at being as old as 1000 BC, it makes perfect sense that various forms of iron currency were created across the continent. Iron came in multiple qualities, with the finest and oldest throwing knives crafted from native smelted iron. Exchange rates fluctuated over time, but the value of throwing knives was immense. In some cases, a single throwing knife could be exchanged for a bride. These extremely fine knives would commonly be owned by chiefs as signifiers of wealth and were preserved as heirlooms and passed down through generations. Lower quality iron scrap metal introduced to Africa in the early 20th Century was also eventually used for throwing knives. These could be extremely deadly, but the quality of metal did not carry the capacity to have quality ornamentation worked into it. In any case, the iron was still worth more as a money than a weapon. Shaped into standardized weights, with standardized forms informed by the region, these were optimal exchange items.

The use of throwing knives as currency falls onto the same continuum of form to function as many objects. Throwing knives could be purely utilitarian, ornate enough to only be used as weapons as a last resort, or as a standardized currency too light to be thrown. Identification of each is difficult. Our Ngombe throwing knife from the Democratic Republic of the Congo has intricately incised dashes and coil designs along one side of the blade. Extremely similar markings are seen on the geographically distant throwing knife from the Mafa of Cameroon and Nigeria. We also see that its shape goes well-beyond its function. The most utilitarian shape for a throwing knife was the F-shaped knife, which when thrown like a baton could take off a leg at 20 meters. Despite the presence of incised designs, the Ngombe throwing knife could do just that. Sans decoration, and thrown overhand similar damage could certainly be affected with the crested Kapsiki throwing knife. The only of the three which was likely not used as a weapon was the Mafa throwing knife. Both the presence of a cord and citations that the extremely heavy weapons were too unwieldy to be thrown indicate that was primarily a prestige symbol.

Text and images may be under copyright. Please contact Collection Department for permission to use. Information subject to change upon further research.
Tags:
African Permanent Collection Currency Weaponry
Spun Silver: Apron Counterweights of the Dong and ...
J.B. Moore: More than One Way to Sell a Rug

Eureka: Inventions of the Bowers Museum

Sonorous Spring: Birds of the Bowers

Hefty sum central african throwingknife currency are really interesting topic. I have focus on these topic for few month cause my job task. Thank you for wrote these article for us. Great job. meesterslijpers.nl