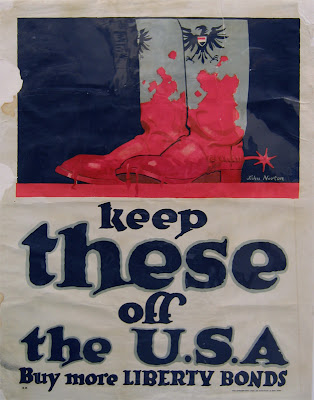 John Norton, Keep These Off the USA, 1918
Paper poster
40.5 in. x 30.5 in
96.41.16 This 1918 poster designed by John Norton depicts a pair of blood stained German boots. Dramatic imagery and threatening typeface evokes the terrible consequences of Germans reaching American soil. This poster is one of many that paralleled one of the Treasury Department's four Liberty Bond campaigns. The posters were effective in obtaining $23 billion in support of war efforts. In a time when television did not yet exist, the use of posters served as an effective means of reaching audiences. Posters could be produced thousands at a time and then quickly plastered to billboards and other surfaces. Poster production was overseen by the Division of Pictorial Publicity, an offshoot of the CPI, which was specifically concerned with the merging of art and crafted wording. In collaboration with some of the country’s best known illustrators the posters from this era appealed to the hearts of America, asking them to enlist for service and especially to buy bonds. Favoring emotion over logic, the posters targeted America’s collective fears and compassion and called into question one’s patriotism, bravery and even sexuality. Currently 17 WWI posters, including the one pictured here, are on loan to Chapman University for the exhibition Posters from the Home Front: Illustrations from the First World War. This exhibition, courtesy of the Bowers Museum, features a small but representational portion of posters used to rouse American sentiment and action in a time of instability. The exhibition is located in the Henley Galleria through August 17,2007 and is free to public.
All images and text under copyright. Please contact Collection Department for permission to use. Information subject to change with further research.
Baby Carriers, Ethnic Minority Groups, China
Akha Woman's Headdress, Belt and Bracelets; Thaila...