With the very possible exception of May gray, there is not much particularly unsettling about the spring months. In fact, they are stalwartly reputed to be upstanding months by most definitions, boasting lovely weather, new growth, chicks, bunnies, blossoming plants, and so on. It is only with the wonderful support system that these seasonal boons provide that this week’s post looks at some of the creepiest objects in the Bowers collections. While the Bowers might not have some of the most universally notorious creepy objects in the world—here’s looking at you Fiji mermaids—as a museum that has been collecting objects for almost 85 years, we have our fair share of objects that might give a viewer pause.

Play with Us, Forever and Ever

Children’s toys are made in a whole variety of shapes and sizes, but anthropomorphic figures like dolls and clowns traverse a fine line between comforting and creepy. The first of the Bowers’ two scariest toys is a rare Lusitania Baby, a souvenir doll which was sold on an ocean liners operating in the WWI era. This example was purchased by its donor on an Atlantic crossing sometime between 1910 and 1911, but those familiar with the history of the war may already be guessing that the highest concentration of these dolls is at the bottom of the sea. In 1915 the Lusitania was hit by a torpedo from a German U-boat, sinking the ship and killing more than half of the passengers on the vessel. Of course, the piercing White Walker blue eyes of this doll just compound how eerie it is. The other toy in this section is less historied but throws its clown cap in the ring on the basis of looks alone. Roly-poly music boxes such as this make a pleasant jingling sound and bounce back up when pushed over, but the clown itself seems to be an omen of impending doom.

Art has taken every imaginable medium over the years, so perhaps a carving made from lamb bone is altogether not too creepy. When paired with the subject matter however, a more compelling case can be made. During the Napoleonic Wars of the turn of the 18th century, French prisoners of war who had been captured and imprisoned on ships by English forces were fed a diet of mutton. The most enterprising of these captives did not let anything granted them go to waste and over a lengthy period softened the bones that came with the meat so that they could be molded and carved like clay. The most famous prisoner of war carvings are exquisitely crafted vessels built from memory in the style of French ships to be sold in English markets. These two guillotines featured in this post are interesting objects that appear to come out of this same tradition. The guillotine was a French execution device, indicating that the blue-coated soldiers decorating the carving are also French, a detail which would otherwise have been consistent with either French or English uniforms. Despite a balustrade decorated with hearts, these examples are deeply unsettling, with the figure in the guillotine even having a detachable head. Perhaps the anxieties of the French carver were being poured out into this work. 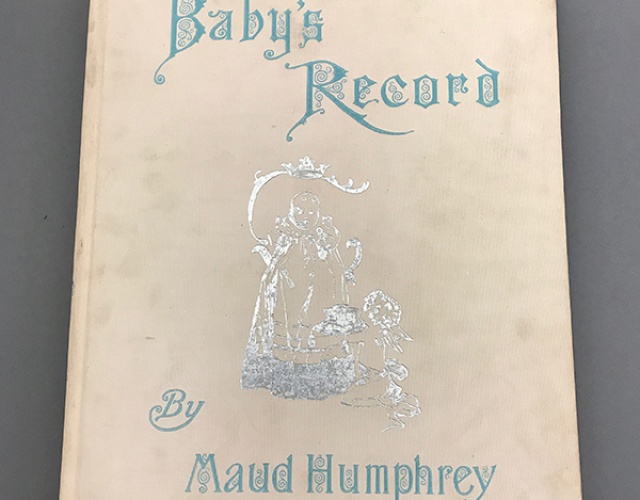 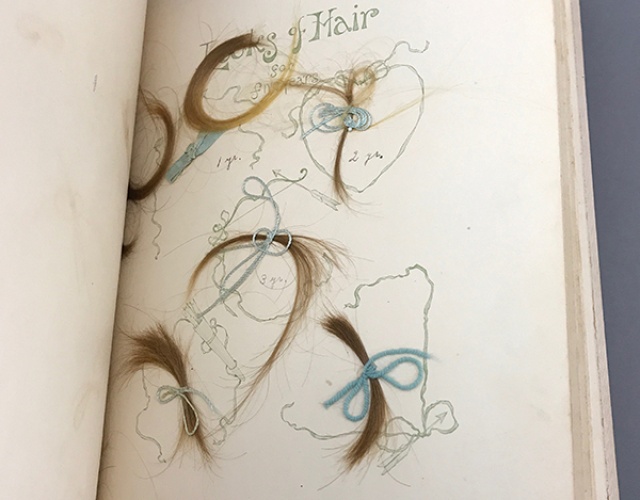 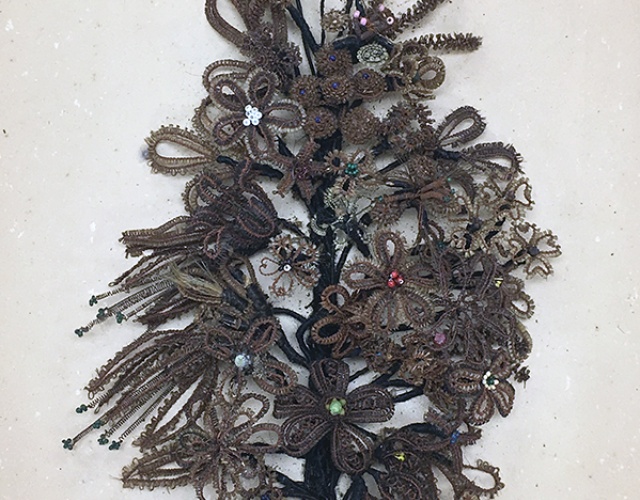 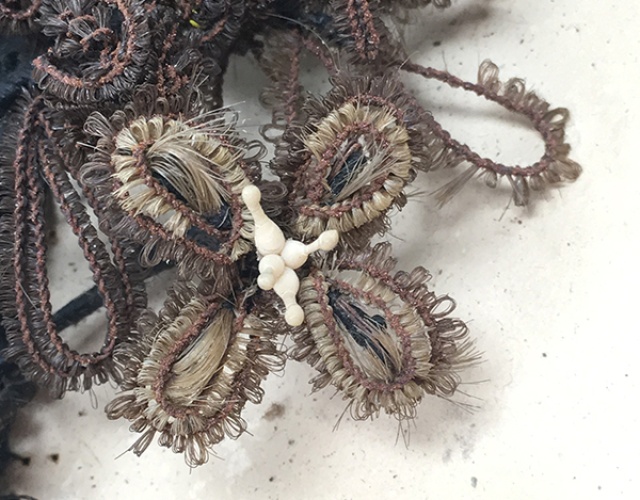 The same Victorians who briefly explored the fad of grinding and snorting Egyptian mummies delved into a great number of other curious pastimes. While taking samples of a child’s hair could perhaps be explained in the interest of charting growth through follicle length or as a nice memento, the popular activity of hair wreathing is more difficult to contextualize in the modern ethos. First off, wreathing with human hair and other human hair jewelry was primarily done to memorialize the recently deceased. Popular etiquette guides at the time outlined the dos and don’ts of working with ‘dos, including proper braiding techniques. This hair weaving was made from the hair of as many as five sisters sometime in the late 19th century and is only one of several in the Bowers’ permanent collections.

This object is something of a cheat because it was formally deaccessioned in 2015. However, much like how the disembodied, floating eyes of Dr. T.J. Eckleburg presided over the narrative of Fitzgerald’s The Great Gatsby long after their antecedent had gone, these eyes too—once intended to be socketed into a doll—seem to haunt the Bowers’ database software. Perhaps there is a degree of irony too, as the objects featured in this post tend to be little seen. They are unsettling or frightening, they are kinds of objects that get lost in a museum collection because they aren’t appealing in the same way a beautifully embroidered quilt might be. No matter how scary something might be though, every now and then it's worthwhile to tear back the curtain and take a look at what springs forth.

Text and images may be under copyright. Please contact Collection Department for permission to use. Information subject to change upon further research.

Christmas Greenings: A Brief History of the Christmas Tree