The Thing About Ding: Chinese Ritual Cauldrons Through the Ages

Though often analyzed mostly through the lens of conquest and war, human history can just as easily be tracked through food. Access to foodstuffs, domestication of animals, crop blights, and more have made and broken empires. Almost every religion on the planet has rituals involving the offering or noshing of food. Some of the earliest artifacts from cultures around the world pertain to preparing, eating, or storing food. In today’s post we look at the ding, a three-legged vessel from ancient China that is in both appearance and function similar to the much later European cauldron. 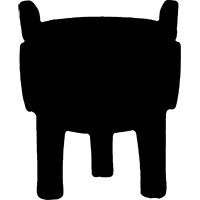 Ding developed organically during the late Neolithic period as a solution to the issue of heating food over a fire. Their tripodal design—the word ding literally translates to tripod—allowed them to be placed right over a fire and distanced them sufficiently such that one need not cook themself at any point during food preparation. The earliest ding were made of clay, had no handles, and had relatively little in the way of surface carving or painting. Their shape appears to have varied widely which can be attributed to the large span of time and numerous cultures encompassed by China’s Neolithic period. With the advent of bronze casting during the Xia and Shang dynasties, ding were cast in metal for the first time, but bronze and ceramic ding were made concurrently throughout their production.

There are a great many different styles of ding which evolved over the centuries with the ever-changing aesthetic sensibilities of China. The first item to note is that the introduction of bronze casting greatly increased the ornamentation on ding. During the Shang dynasty most ding relied on the taotie, a mythical creature with indefinite features, as their primary decorative motif. Both of the bronzes featured in this post were made later and use repeating motifs stamped into their molds to create incredibly intricate surface designs. The bulbous shape of standard ding is also only one of many. Fang ding literally translates to square tripod and is the somewhat oxymoronic name for rectangular ding. Li ding differentiated themselves by their bowl having a triangular shape. The form of the ding also spawned several other three-legged object types used for food and wine such as the xian, jia, and he.

Legend of the Nine Tripod Cauldrons

Despite having utilitarian origins, ding were designated for ritual and prestige functions even in Neolithic times. They would be filled with food or sometimes animal sacrifices to be presented to ancestor spirits. During the Xia dynasty their status was further elevated when Yu the Great cast nine colossal bronze ding for the emperor. On average these cauldrons were said to weigh seven and a half tons. Unfortunately, they were lost or melted down sometime during the first two years of the Qin dynasty, but by that point ding were already established symbols of the power bestowed to rulers by the mandate of heaven. Only the emperor could use nine ding together in ritual offerings. Lords were allowed seven, and so on down to low-ranking officials who could only use one ding for offerings. The greater importance placed by Zhou emperors on food rather than wine further increased the importance of ding, which were already the preeminent bronze ritual vessel for food. Around the middle of the Zhou, a system was developed to use ding to identify noble classes. These objects became canvases for epigraphs which tell modern researchers a great deal about Zhou dynastic life. In many cases high ranking officials used ding to record special occasions by casting Chinese characters directly onto the bronze vessels.

The Han dynasty was a turning point in Chinese history, as breakthroughs in agriculture and animal husbandry greatly increased commoners’ access to meats and other non-staples. Within the span of centuries food went from a necessity to an art form anyone could indulge in. These sweeping changes also affected cookware. When the first stoves were invented in China during the Han dynasty, ding became functionally obsolete in the kitchen, though they continued to be used for ceremonial purposes, as containers for food, and as prestige objects. As is the case with the unpainted pottery ding in this post, cheaper ceramic ding were also made to be buried with the dead and thus brought to the afterlife. Ding were never commonly used for cooking or rituals after the Han dynasty, but during the Song dynasty, their form saw a resurgence in ceramic as an incense burner. As a stalwart icon, ding have become closely associated with China’s cultural patrimony. The Shanghai Museum built in 1952 is designed to look like a ding and in general the form still commands much respect in China today.

Weighing in on Steelyard and Bismar Scales

Peak Perfection: Mountains in the Art of the Bowers

Fog of Yore: Clouded Scenes of Days Gone By

Staying on Tusk: Ivory in Ancient Arts of China

Very interesting. I wish to see much more like this. Thanks for sharing your information!

0 Cancel Reply
Very interesting. I wish to see much more like this. Thanks for sharing your information!
Cancel Update Comment
First Page Previous Page 1 Next Page Last Page